Solar in the Global Context

The large-scale deployment of Solar Photovoltaic (PV) is of rising interest in both the national and global context. In 2005, the global installed capacity of Solar PV was a mere 5.1 GW; however, by 2016 this capacity had increased about 40 times to 303 GW, of which 75 GW was added only last year. Out of the total global capacity, China alone accounts for around 78 GW, followed by Japan which accounts for 43 GW. With more than 40 times increase in global Solar PV capacity over just a decade, Solar PV technology is the fastest growing technology among all the renewable energy technologies. This accelerated growth of grid connected Solar PV signifies the importance of grid connected Solar PV system throughout the world.

Electricity generation in Nepal is hugely dependent on hydropower. Nepal’s current total installed capacity in the national grid, also known as the Integrated National Power System (INPS), is a mere 968 MW, out of which 914 MW is from hydropower and only about 1 MWp is from Solar PV. Over one-third (34.76%) of the annual energy demand is imported from India, which cannot be considered a long-term alternative to meet the demand in view of energy security. 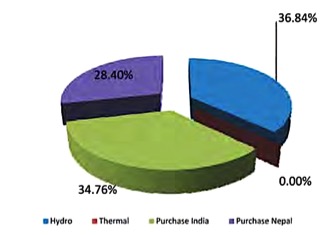 Nepal’s current load forecast scenarios are based on a linear model of “suppressed demand”, which does not reflect the reality. Suppressed demand is the situation where energy services provided are insufficient – due to poverty or lack of access to modern energy infrastructure – to meet the needs of the population given their human development needs. As per capita incomes grow over time, energy service demand and consumption would increase, so that even without access to electricity it is likely that fossil fuel energy consumption would rise over time. Therefore, a more realistic demand forecast would look at substitution of fossil fuel energy demand by renewable electricity while also accounting for increase in energy demand due to increase in per capita income over time. Therefore, the current progress rate of hydropower development is not sufficient to meet the real future energy demand of the country. Most of the hydropower projects in Nepal are Run-off-River type with design discharge of Q40% to Q50% meaning that the hydropower projects are only capable of delivering around 40-50% of their full capacity during dry months (6 months/ year), thus creating extensive power shortage during this time of the year.

There are two Diesel Power Plants of 53.4 MW capacity but since the fuel needs to be imported and the plant needs frequent maintenance, the cost of electricity is significantly higher such that these plants are seldom in operation. Additionally, diesel plants emit green house gases, which is exacerbating climate change. In context of resilience of energy generation sources to natural disasters and their ability to serve the demand during catastrophes, the recent natural disaster such as 2015 Earthquake of and 2017 Flooding in Nepal have elucidated that hydropower plants are very vulnerable to such natural disasters. Unlike hydropower plants, solar plants can be made resilient to such natural disasters at a marginal cost. This resilience aspect of solar plant over hydropower plants has shed light on the necessity of incorporating diverse sources on power generation in the energy mix. By incorporating more diverse and disaster-resilient energy generation sources in the national grid, energy demand can be fulfilled in the hour of the need. Therefore, large-scale deployment of solar power plants is the next logical step in sustainably meeting the growing energy demand of Nepal. 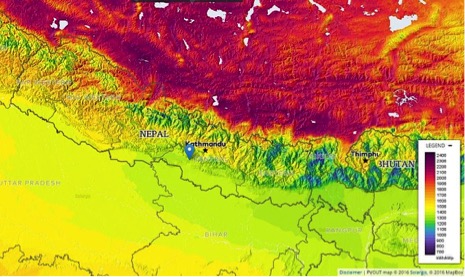 Nepal receives optimal sunshine of around 300 days throughout a year in average with total solar irradiation of 3.6 – 6.2 kWh/m2/day with an average of 4.7 kWh/m2/day, which makes solar power a significant renewable alternative for electricity production in Nepal. Also the substantial decline in the cost of solar PV technology (around 80% reduction since 2008) has proven to be beneficial for the development of Solar PV Projects. There are around 943 medium sized solar PV units for communication sector, which contribute to 1.5 MW of electricity. There are around 225,000 of solar PV home units installed throughout Nepal, which have a total contribution of 5.36 MWp. With rapid technological advancements in the field resulting in increased efficiency and significantly reduced costs, solar power has gained significant attraction from investors. With the drop in cost of solar PV technology and owing to its reliability and sustainability, interest in Solar Power has been growing rapidly in case of Nepal.

In Nepal, Nepal Telecom was one of the first organizations to install solar PV in the 1970’s. After the establishment of Alternative Energy Promotion Center (AEPC) in 1996 with the main objective to promote alternative energy in Nepal, more than 70,000 off-grid solar home systems, approximately 2,000 off-grid institutional systems mostly for schools, hospitals, FM stations, etc. have been installed till date.  Most interestingly, the first grid connected solar PV system of 1.1 kW-peak (kWp) capacity was installed at Center for Energy Studies, Institute of Engineering (IOE) Pulchowk Campus on 31st October, 2012. The grid-connected Solar PV installations of 3.3 kWp in Min Bhavan Substation of Nepal Electricity Authority and 1.1 kWp capacity at RIDS-Nepal (Rural Integrated Development Services – Nepal), Imadol, Lalitpur were completed in December of 2012 and in February of 2013 respectively. These initiatives were taken by SUPSI Project in Nepal mainly for the research purpose. The data is monitored and recorded and then fed to a server that has a graphical user interface, which can be seen on http://www.pvnepal.supsi.ch.

Till date, approximately 2 MWp cumulative capacity of solar PV systems have been connected to the national grid. The largest one is 1 MWp plant in Nawalparasi, followed by a 680.4 kWp plant of Kathmandu Upatyaka Khanepani Limited (KUKL) at Dhobighat, Lalitpur installed in 2012 which was financially supported by Japan International Cooperation Agency (JICA). This plant was successfully commissioned on June 2012 and handed over to Government of Nepal (GoN) on 11 January 2013. The Power Purchase Agreement (PPA) was signed between Kathmandu Valley Water Supply Management Board and NEA.

The commercial Grid Connected Solar PV (GCPV) system has been discussed by energy experts for more than 5 years in Nepal. Result oriented events including talks, seminars and workshops have been frequently organized by the incumbent Prime Minister of Nepal announced that the government would build grid connected solar plants with cumulative capacity of 200 MW within a year. Immediately after the announcement, Ministry of Energy has formed two committees for the study of (i) Technical Feasibility of grid connected wind/solar system and (ii) PPA rate for grid connected wind/solar system. Ministry of Energy and Water Resources has set the PPA rate at NRs. 7.30 per unit (approx. USD 7 cents per kWh) over a project lifetime of 25 years.